Monday night, my darling spouse reminded me that we still had 2 packages of Thanksgiving turkey in the freezer.  I loved archaeology as a kid and don’t mind excavating in the freezer – even if it means carbon dating an unmarked package before attempting to identify its contents.  But he is much more persnickety than I am about such matters.  I took his comment as a gentle hint that “we” should find a way to use said turkey before my own mother and the USDA would tell me to throw it out.

The weather forecast called for a light dusting of snow as I pondered how to use the turkey slices.  With cold air outside and the oven, at the ready, I yearned for baked comfort food. Then it hit me – turkey pot pie!  I don’t think I’ve had a pot pie since the days when Swanson TV dinners were the order of the day, but a homemade version sounded like a plan.

I decided to use only ingredients on hand.  Luckily, I had puff pastry in the freezer, so I didn’t have to think about making a homemade crust.  By the way, if you want to get technical, according to my husband and Wikipedia, this isn’t a true pot pie because it doesn’t have a bottom crust.  But hey, if that’s your only complaint (as it was my husband’s while he gobbled up all of his portion), then I’ll consider the recipe a success.

Frozen puff pastry is great stuff.  It comes in sheets or in rounds.  For this recipe, buy the sheets.  They come 2 to a package and you’ll only need ½ of 1 sheet.  You’ll be able to keep the rest (frozen) for another recipe or for another batch of pot pies.

I used individual 13 ounce soup bowls that are oven-safe.  Mine are 3’ high x 4- 4 ½ “ deep.  This recipe fit those bowls perfectly.  Ramekins of that size would work too.  If you don’t have individual oven-safe bowls or ramekins, you can use a pie plate.  Pie plates are measured by their diameter and typically come in 8” and 9” sizes.  Note: If using a pie plate, cover the entire plate with all or part of an entire puff pastry sheet.

You can make this pot pie with leftover chicken instead of turkey.  In fact, it would be a great way to use up the ends of a roast chicken.  Changing the types of vegetables or adding others would be fine too, though you probably want at least ½ cup of onions or leeks. 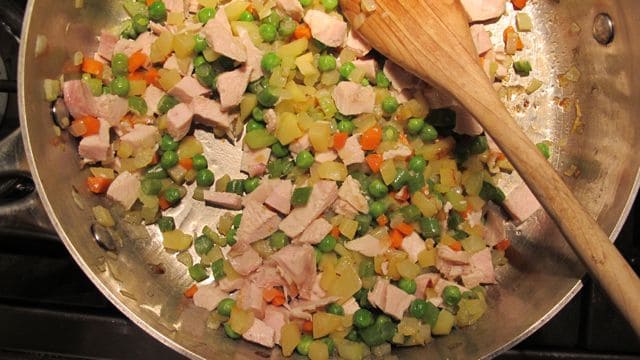 The butter and flour will thicken the liquid and you won’t be able to taste the flour as long as you give them time to mix and cook before adding the liquid.  This equal-parts-butter-and-flour mixture is called a “roux.”  It is the basis for many gravies and sauces.

Continue cooking at a low simmer until the mixture is thick enough to coat the spoon. 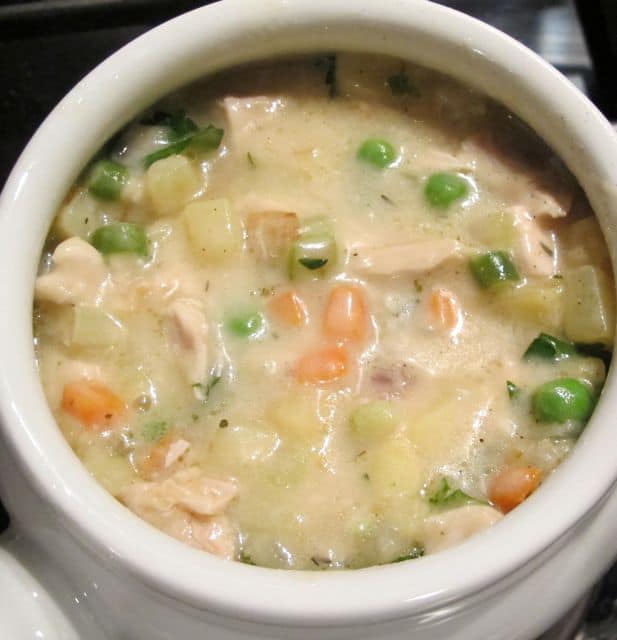 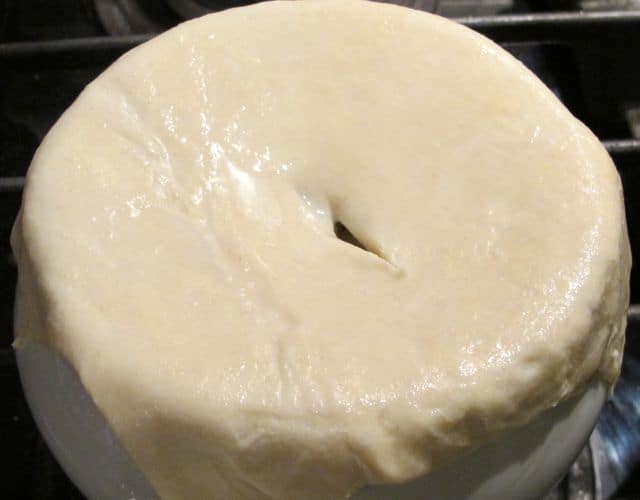