This is a tale about takuan or pickled daikon. It’s also about a recipe for pickling these Japanese radishes and how my long-held “parent lecture” about not talking to strangers has gone by the boards in the day of Twitter.

Twitter is a random place for me. Sometimes, I get into long conversations and other times, I go days without checking my feed. I follow a diverse (some would say motley) group, including foodies, journalists, authors, scientists, family and friends, people who amuse me, and a bunch of folks I follow for reasons I can no longer remember.

One of my favorites is Guy Kawasaki. I’ve read two of his books (APE: How to Publish a Book and What the Plus!: Google+ for the Rest of Us) and feel confident that Guy could sell me snow in a snowstorm. I’d describe him as an offbeat, Renaissance man of the online world. Although I’m old enough to be his much older sister, if not his mother, you could say that I’m a “fan girl” of his, in a non-romantic way.

Anyway, I came upon this tweet from Guy. Though most of his followers probably passed the tweet by, I was wowed.  Putting aside my shyness about contacting him and my belief that even if he read my reply, he’d never answer, I asked if I could blog about the recipe. Guy quickly responded that I could. (He answered my tweet, * swoon *)

I don’t know anything about Mrs. Kawasaki, but I bet she is one of those mothers (and grandmothers) who cook without fanfare. Whether they follow recipes or not, for them cooking is part of the important job of caring for their families. No trendsetters or hobbyists, they have kept home cooking alive and well for generations and centuries. My kind of women.

It seems only right that one of the great proponents of using social media and the internet (Guy) should send his mom’s recipe for takuan or pickled daikon radish out online and a person who finds it and uses the recipe should be a Jewish woman who has never cooked Japanese food. After this, maybe someone on another continent or from another cultural or ethnic tradition will read this post and the recipe will travel further  – and on it will go. Maybe passing on traditions isn’t what it used to be, but that isn’t necessarily a bad thing.

This recipe is special to me for another reason – it reminds me of my own mother. She introduced me to daikon radishes when I was in college. Slicing them super thin or cutting them into matchsticks, she served daikon as an appetizer with dip and other cut up vegetables. In local food stores, I’ve occasionally seen large daikon like those my mother served. My vegetable guru, Elizabeth Schneider, confirms in her book, Vegetables from Amaranth to Zucchini, that the two sizes taste the same. But I wanted to be true to Mrs. Kawasaki’s directions, so I searched out the smaller version in an Asian grocery.

In order to learn more about takuan and what foods it is typically served with, I asked a young artist friend, Hannah Wides, who has studied Japanese language and culture for years and who has lived in Japan. Here is what she said.

Hannah even pointed me to this dictionary of tsukemono.

From the bit of research I did on takuan, it looks as if Mrs. Kawasaki’s version pickles more quickly than most. It also leaves out rice bran, which seems to be a common ingredient in this dish. No matter. It’s crunchy and a spicy/sweet treasure. I only wish Guy and his mom were here jn my kitchen enjoying takuan with me.

After I used small daikon for Mrs. Kawasaki’s recipe, I tried it with the larger daikon, sliced super thin and salted, rinsing and squeezing dry after a 30 minute rest to remove water from the radish. (I use that basic technique in cucumber salad and also saw it in another recipe for takuan.) With the larger daikon, I halved the salt in the brine, given that the radishes had already been salted to pull out water.  I ended up with translucent pickled daikon “coins” that reminded me of pickled ginger. 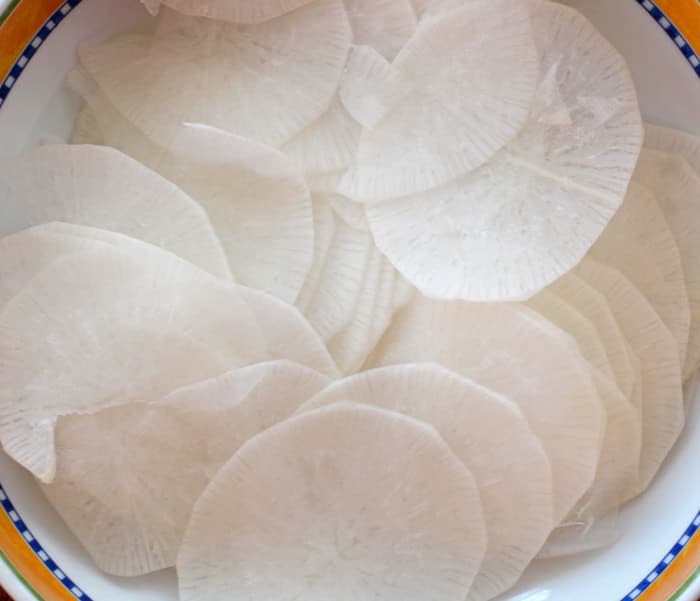