In search of an impressive homemade contribution for a holiday party or a gift for friends and family? Candied citrus peel is among the simplest and least expensive alternatives. Like candied ginger, all it requires (besides the item to be candied) is a bit of patience, a heavy pot, a cooling rack or a large pan or just wax paper, a few utensils, sugar, water, and a tiny bit of cream of tartar or corn syrup.

Today’s post is about making candied orange peel; the next post will be on candied grapefruit and lemon peels.

There are two ways to make candied citrus peel – keeping the pith (the white insides of the fruit) on or taking it off. If you leave the pith on, the peel is thicker and will stand up as in the picture below. With pith off, as in the lemon rind for limoncello, the peel is thin and stays rather pliable. The pith is bitter unless you boil it several times, so “pith on” candied citrus peel takes a bit longer to make than the thinner type.

I tried both ways for orange peels; I like the thinner type for baking and prefer the thicker peels for candy.

The basic technique for making candied citrus peel is to cut the peel off the fruit, boil it at least twice, drain and cook it in a sugar and water “simple” syrup, then drain and dry the peel before rolling it in sugar. Although you’ll find variations in the number of times to boil the peel, the amount of time for boiling, the proportions for the simple syrup, and the required drying time for the peels after cooking, the fundamentals stay the same.

For these candied orange peels, I used the simple syrup proportions from a Lisa Yockelson recipe I had clipped out of a paper ages ago with my own timing on the boiling and drying.

Orange and chocolate is a divine combination. You can simply melt bar chocolate and dip the partially dried orange peels, as I did. However, without tempering the chocolate (a rather exacting process involving heating chocolate to a precise temperature, lowering the temperature and then raising it slightly), the peels don’t keep their shine after drying. They still taste great though, and taste the same as if the chocolate had been tempered. 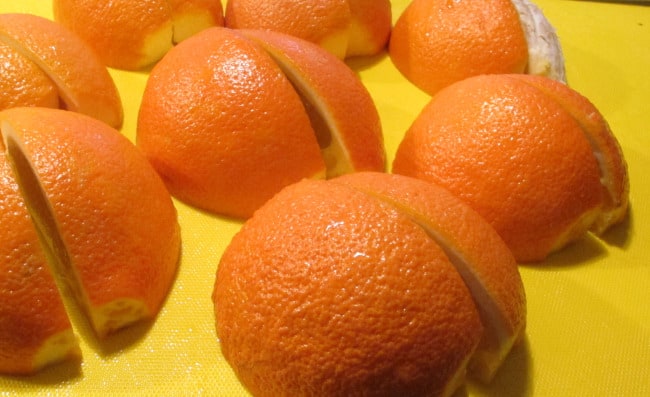 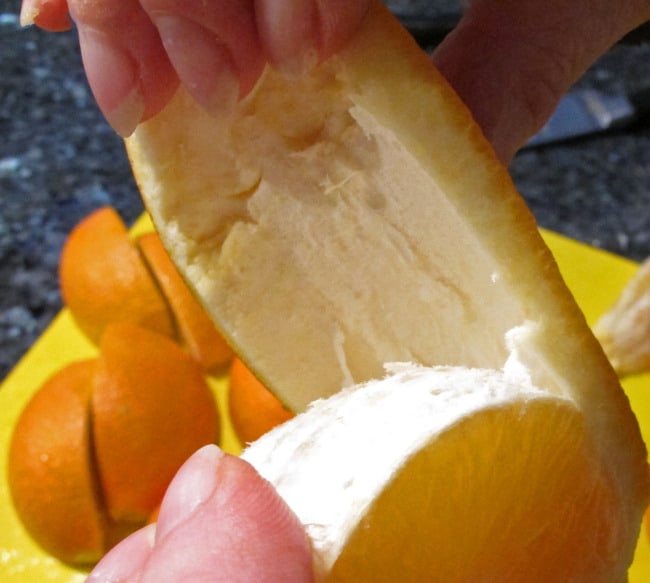 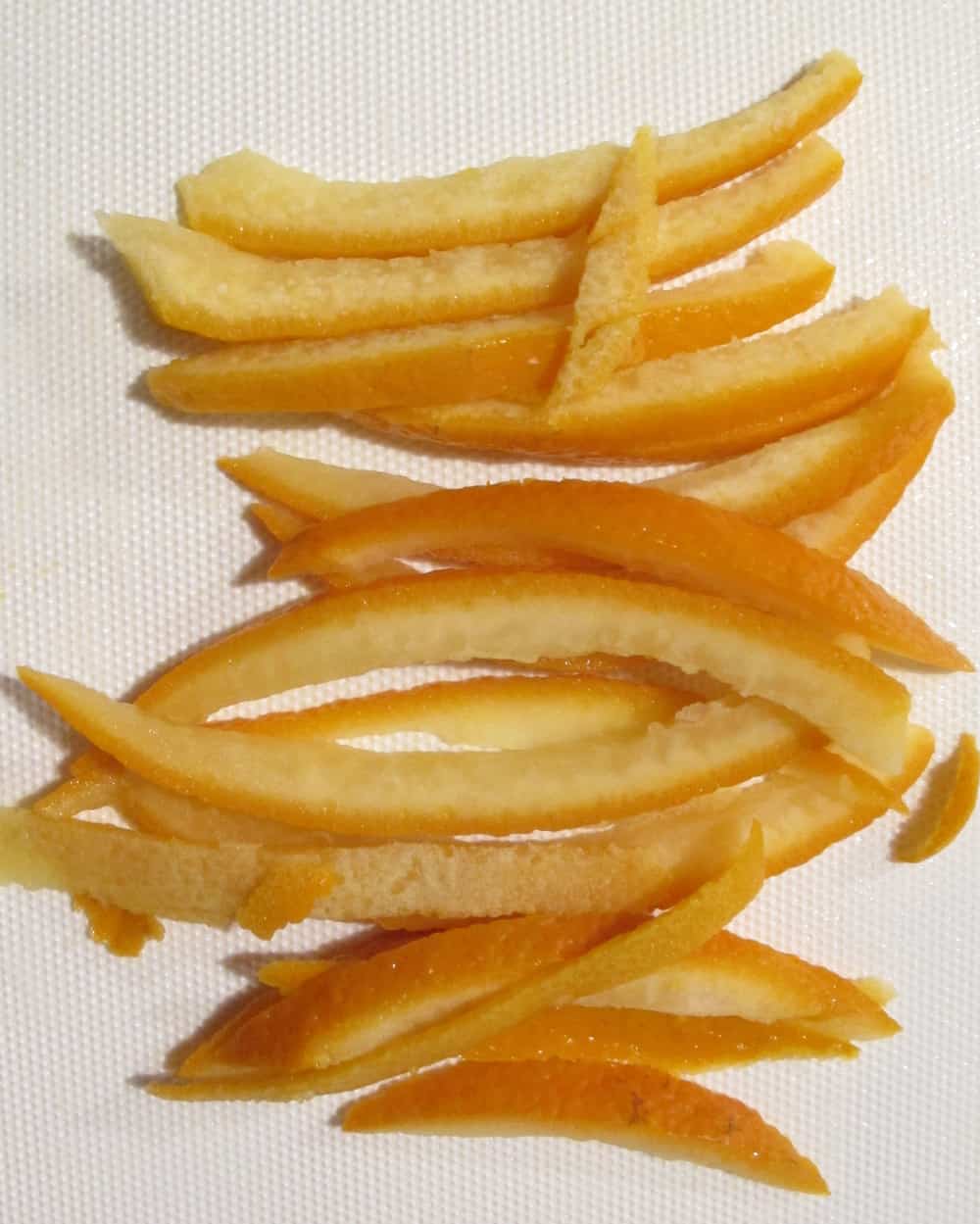 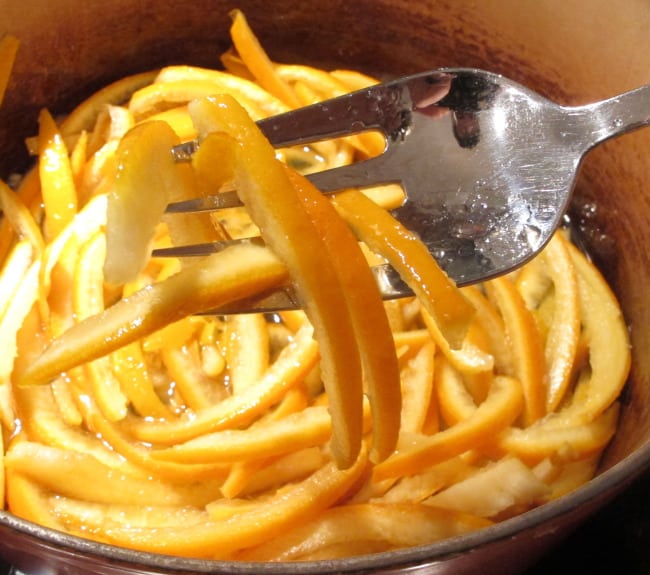 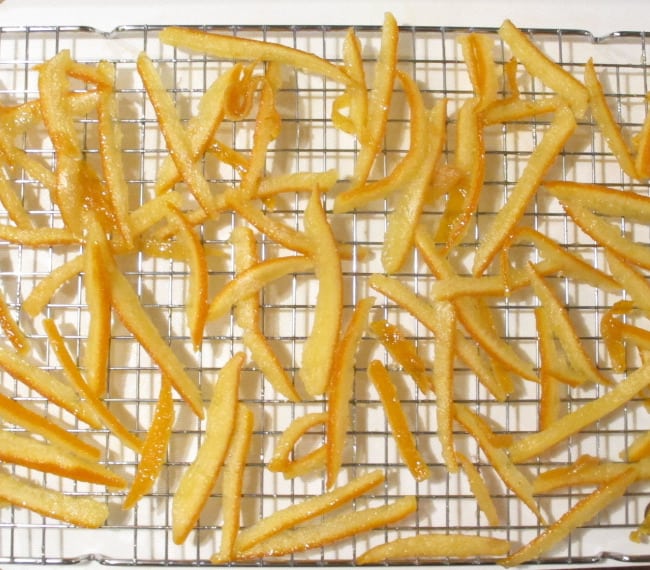 The orange peels can be stored for a week or longer in a tightly covered container. 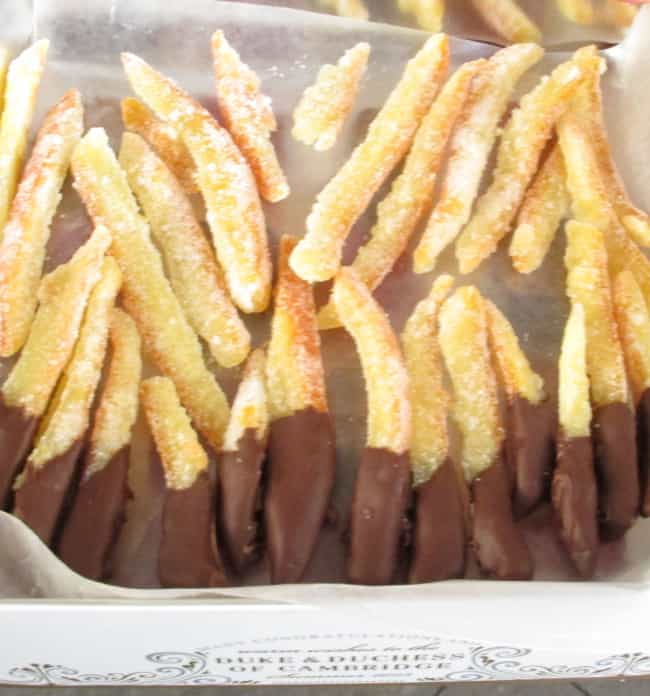